What is the best way to place a microphone for acoustic guitar? 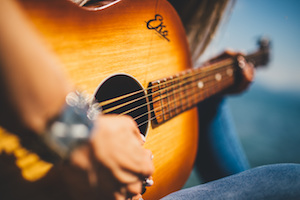 There are several ways up the mountain when miking an acoustic guitar in the recording studio. One of my all time favorites is using a clip-on lavalier mic

! I find it to be the warmest and most detailed sound, but it also serves to solve another huge issue we have in the studio: too much moving around!
As you know when the actor/singer/player moves “off the mic” there can be a drastic change in sound quality. This is particularly an issue when recording acoustic guitar. But using a lav mic which is physically clipped onto the guitar’s sound-hole solves this problem. It also gives the player much more freedom to express themselves!

aimed at about the 12th fret. NOT directly at the sound hole. You can actually mix-and-match between both of these microphones for the perfect sound (but be careful with your phase. Try nudging one of the mic tracks by a few samples to line-up again in your Digital Audio Workstation (Pro Tools

etc).
Like all things in the studio: there are no hard rules. The best rule is whatever makes it sound amazing! Have fun, experiment and let us know what works best 😀

This site uses Akismet to reduce spam. Learn how your comment data is processed.